In our last blog post we discussed using archives and museums to come to a more tangible understanding of your subject. With art in particular, it is popularly said that to capture the true essence of something you must draw from life and whether you prescribe to this way of thinking or not, we can all agree that it is at least a good skill to have. Of course, before the relatively recent advent of the internet, turning to the breathing outside world for reference was fairly standard practice while these days tracking down a relevant book at the library feels like a field trip. I would personally advocate that both ways of working have their excellent merits but today I wanted to discuss another, a third way, that treads between the two. 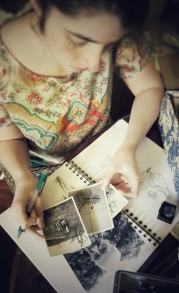 Personal memorabilia. We’ve probably all gathered together an eclectic mix of household items at some point in an attempt at creating a still life to rival the Dutch painters of the 17th and 18th centuries; maybe some of you were even successful. That’s not what I’m talking about though. To use personal objects successfully you have to be specific. Our accumulation of stuff can, in its own way, be as tricky to navigate as the V&A so focus and a good map are key. I would suggest that pinning down the time period you’re hoping to recreate in your artwork (visual or verbal) is a solid starting point. Then consider place and what you’ll be drawing or writing about i.e. people? Furniture? Small household objects? Bare all this in mind and have a rummage. You’ll probably be surprised at what you’ll find when you suddenly view the contents of your house with these new, more focused eyes. Plus, you won’t even have to step foot into the wild and messy world beyond your front gate. It has all the convenience of referencing from the internet, with all the kudos of drawing from life. 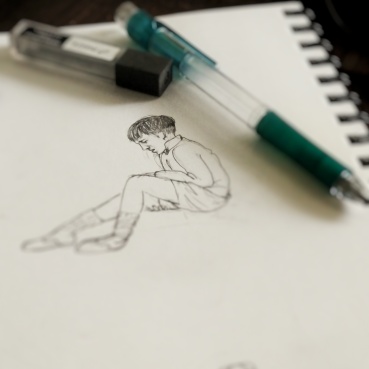 Take this example: A few week ago I was sketching out an image for The Waves, the Waves to illustrate a moment immediately after a gas works explosion near a Cornish coastal road. In the foreground I was attempting to draw a young boy with a wounded knee being comforted by a member of the WRENs. I used the internet to find the details for the WREN uniform and had just launched a new search for “young boy ww2” when I remembered a shoebox of old photographs originally belonging to my grandparents, now sitting on top of the dresser. Among its jumbled contents were photos of my grandpa as a young boy during the 1930’s. Perfect reference for haircut and clothing, even some authentic 30’s facial features! It was a small thing really and I could have just as easily continued with my search for “young boy ww2” but it felt nice to include my grandpa, who recently passed away, into my art and gave me a new appreciation for the dusty objects in our houses we often overlook. However small, however seemingly insignificant, however much we have become so accustomed to their existence that we no longer see them, they all have a story to tell and by looking at them afresh, we can bring our own stories to life by telling theirs.

2 thoughts on “Grandpa (by Merle Hunt)”