A style of painting and literature in which fantastic or imaginary and often unsettling images or events are depicted in a sharply detailed, realistic manner.

The Picture of Dorian Gray by Ivan Albright, an early Magic Realist painter.

As with all things, the dictionary succeeds in being concise and matter of fact when asked for the definition of Magic Realism. On this instance I was relieved to find just two neat lines on the subject when in all other cases I had found a confusing number of rambling and contradictory explanations. I was keen for something that would give me a quick grasp of a phrase I have been applying to the style of my own work for a while but that, while I comprehended my own meaning for it, I did not have a full understanding of. Well, the dictionary (oh font of all worldly knowledge!) certainly clarified things, but, in its very preciseness, it had somehow missed the essence of magic realism in my mind. I searched google again in the hopes of finding that one paragraph which would confirm my limited understanding and found this website: http://www.monograffi.com/magic.htm. It proved to be quite useful (and absolutely the clearest) in giving a good grounding of the meaning and the exact dates in which the genre, termed Magic Realism, is considered to have existed in art. However, I was left wondering how this could be applied to contemporary forms of magic realism and if, in any case, it tallied more with the dictionary’s definition than my own. Was I justified in thinking some modern artwork also deserved the term, not to mention the very story that Abra and I are working on for this blog? This, of course, is the crux of the whole thing, the reason I have become so interested in the subject. Magic Realism (my magic realism as I now think of it) has lent a leading hand in the creation of a story that includes both the slippery streets of a sea-side village and the slippery nature of time itself.

Hear Me Calling by Catrin Welz-Stein, a contemporary digital artist with an essence of Magic Realism.

The idea of Magic Realism has always appealed to me although to me the concept has always implied the juxtaposition of the magical within a realistic setting rather than the realistic portrayal of the magical, a clear difference but a subtle one. And perhaps that is the distinction to be made. With a better understanding of the accepted definition of Magic Realism then I’ve ever had before (thanks dictionary!), I’ve come to realise that along the way I’ve appropriated the meaning for my own use and given it a new classification. Those two words have been presented to me and I have interpreted them to my own satisfaction before seeking their historical significance.

Let me explain to you my own view on Magic Realism. The first time I came upon a work of that genre it was in written form rather then artistic: Nights at the Circus by Angela Carter. It was the poetry of it that intrigued me, the poetry of the images it encouraged. A timid, abused, mouse-brown girl dancing a waltz across a circus stage with a tiger. A love-eyed reporter, dressed as a clown, huddled in the freezing poverty of a babushka’s hut, still typing his stories. A woman with wings. All these images offered up oxymorons like a poetry lesson. I was enchanted. At the same time I was handed the term Magic Realism and to me it became a term imbued with reality made magical; the everyday interwoven seamlessly with the fantastical. In fact, research then and now has shown me that its prior meaning is the reverse of my understanding of it. It is instead, the magical rendered realistic and in that way the magic is lost. 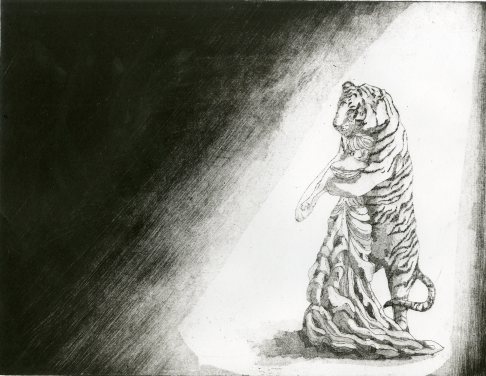 The Waltz by Merle Hunt, an etching to illustrate Nights at the Circus.

Should I now refrain from calling myself a Magic Realist? Should I change my work to fit the phrase? Should I allow the meaning to evolve? My decision now will not change the face of the art and literature world of the future, there will not be books written about me, but it’s an interesting question….don’t you think? In my mind, it seems obvious that we should grow. We should be aware of our heritage as artists but we should also be willing to hang our hats from another peg. I am pleased to recognise the precedent set out before me but I rather like the look of Magic Realism written above my coat hook as well. If evolution is inevitable then I will respectfully but proudly keep my own version of Magic Realism, thanks all the same Dictionary.