I want to tell you about why Merle and I decided to create this novella in the first place:

Last Friday I witnessed a very literal representation of what both of us had for so long struggled to put into words even in a way we could interpret for ourselves let alone to those curious enough to inquire. In the simmering depths of our souls we knew what was driving our project but turning that knowledge into a coherent sequence of stringed together thoughts had thus far proved tricky.

Until I stepped into the upper realms of the Bussey Building in Peckham Rye on an inconsequential Friday evening and tripped headlong into The Factory’s engaging production of The Odyssey. It was transportive, immersive, a cartwheel of creative invention that turned conventional theatre on its head. When I say engaging I mean it quite literally: the audience was turned from quiet bystander to the catalyst on which the whole performance was shaped.

Done entirely through improvisation, The Odyssey progressed chapter by chapter with members of the audience picking out shards of pottery from a bowl, upon which were written directions on how the next section should be enacted: in song, as animals, through rhyming. At times the audience was required to become the set in which the action revolved, asked to provide the dialogue between two characters and, in a very fitting penultimate scene, one member was given the opportunity to step up and take on the part of Odysseus himself. By that time a sort of creative flow had built up between the actors and audience, a slow osmosis of creativity that had infused us all. A man got up and no one was hoping he would be good or say the right thing, he could have laughed continuously, been as wooden as a pole, whatever, it didn’t matter, standards of perfection were measured purely on the willingness to be engaged. Everyone was utterly open to the influx of creative stimulus and all because The Factory had fashioned a space safe enough to expose our vulnerable, creative centres. 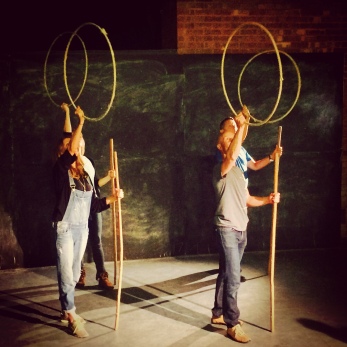 The cast of The Odyssey in action.

Today, out there in the everyday, we’re not supposed to be vulnerable, we don’t want to allow ourselves the opportunity of being imperfect and we are measured against a strict and narrow perception of perfection that regularly misses out our potential to be beacons of creative genius.

The Odyssey shone a light on that potential, it said let’s make something together and that’s exactly what we desire for our novella. We want to tap into our deep wells of creative genius, we want to collaborate together to produce a book that is more than the sum of its parts; that is magical and beautiful and vibrant. But more than that we hope that this book of awesomeness can inspire. Without wishing to sound like we are eager for you all to catch some nasty virus or something, we want more than anything to infect those who open the pages of our novella with a desire to engage with their own creativeness. And only at that point will either of us be willing to say job done.

Here’s to imagining the job done!